Come Makar Sankranti and freshly harvested ingredients are celebrated all over the country in countless forms – from boras and pithas to meet chawal and khichuri. The communities of Odisha are no different and each has its unique repertoire of dishes made with fresh rice, legumes and sugar cane.

Shweta Mohapatra, who started the Odia Food Stories page on Instagram last year to document state food through illustrations, recipes and stories, feels there is a tendency to generalize regional food and not look at the detailed details. Odisha’s food in particular is mostly seen through the lens of temple cuisine and the more popular street food such as. aloo dum. “What about Odia Muslim food, or tribal food and feeders? You have to include everyone. Odisha is a region that is incredibly diverse: Its food is not just a set of recipes made using local ingredients. It is a network of customs, habits. and lifestyles, ”she says.

The coast, for example, is rich in vegetables, and close to both the river and the sea, you have easy access to freshwater fish along with shellfish. According to Bhubaneswar-based photographer and blogger Alka Jena, the western side is influenced by its neighboring states and focuses on feed. North and South are dominated by more than 60 tribal communities, each with remarkably rich food traditions. “We have not even touched the tip of the iceberg when it comes to acquiring knowledge about their food. The West focuses on sour food, while the South, with its proximity to Andhra Pradesh, presents a sour and spicy taste profile. You will find place incorporated into a lot of dishes in the north as it is close to West Bengal, ”she notes.

These influences can also be seen in the autumn dishes. During her research, Jena came across an unusual recipe from Mayurbhanj’s Santal community. They make one pitha with the local rice, pimpudi basa, which is a fine-grained, fragrant variety. This pitha has no filling. A dough is made with rice powder and sugar cane juice or jaggery, and a thin layer is then applied to the inside of raw salt leaves. This is sealed and stored in the fire. This is very different from enduri pitha typically made in coastal Odisha, with rice and office gave, filled with coconut, jaggery and cardamom and steamed in turmeric leaves.

According to Bhubaneswar-based blogger and writer Sweta Biswal, there are fewer restrictions on the consumption of non-vegetarian food during festivals in Mayurbhanj, a contrast to the areas near temples. In fact, it is under Makar Sankranti tradition to have chunna roti, made with rice flour and sheep curry.

“Under Makar Sankranti, some people do too saru chakuli, or soft crepes, with office gave and rice dough, which is eaten with liquid jaggery, ”says Ahmedabad-based Sujata Dehury, who is from western Odisha. In that part, people do too letha bora, or urad dal fritters pounded in caramelized jaggery syrup. Makar Sankranti is closely followed by Pousha Purnima, and to the west and some parts of southern Odisha, khichuri with freshly harvested legumes such as office and horse gram is cooked with rice, sesame seeds and jaggery. According to Biswal, roll buffalo, or pus manda, is also made under Makar Sankranti and Pousha Purnima. Rice dough is filled with a mixture of sesame and declare (popped unshelled) and then steamed. The farce varies slightly from region to region.

The one harvest dish that is common to most parts of Odisha is charcoal charcoal made on Sankranti Day, with the new rice with cane pieces, sesame, jaggery, cottage cheese, sliced ​​fruit, honey, milk and yoghurt. Dehury says this is a solid ingredient made in most households at this time of year. “Everything is fresh this season. So we use dhuli hui moong and new rice. It’s like one naivedyam and offered as bhog, ”Says Dehury, whose Instagram page is dedicated to Odisha’s food. Often, popped rice is added to this mixture.

The months of December-February are marked by a host of seasonal greens. The preparations, although not marked for a particular festival, are made through the winter, even at the time of harvest. According to Dehury, winter marks badi season in Odisha; it is traditionally made with fresh office gave. These are prepared with seasonal vegetables and served with steaming hot rice. Onion stalks and amaranth are also very popular around this time. “Some of the most beloved winter greens are radish greens. These are cooked with peanut paste. Green onions, along with the onion flower buds, are also favorites, either as simple stir-fried onions with vegetables or cooked with mustard paste. Spinach is also a popular evergreen cooked with aubergines, with badis added too crunchy, ”says Mohapatra. 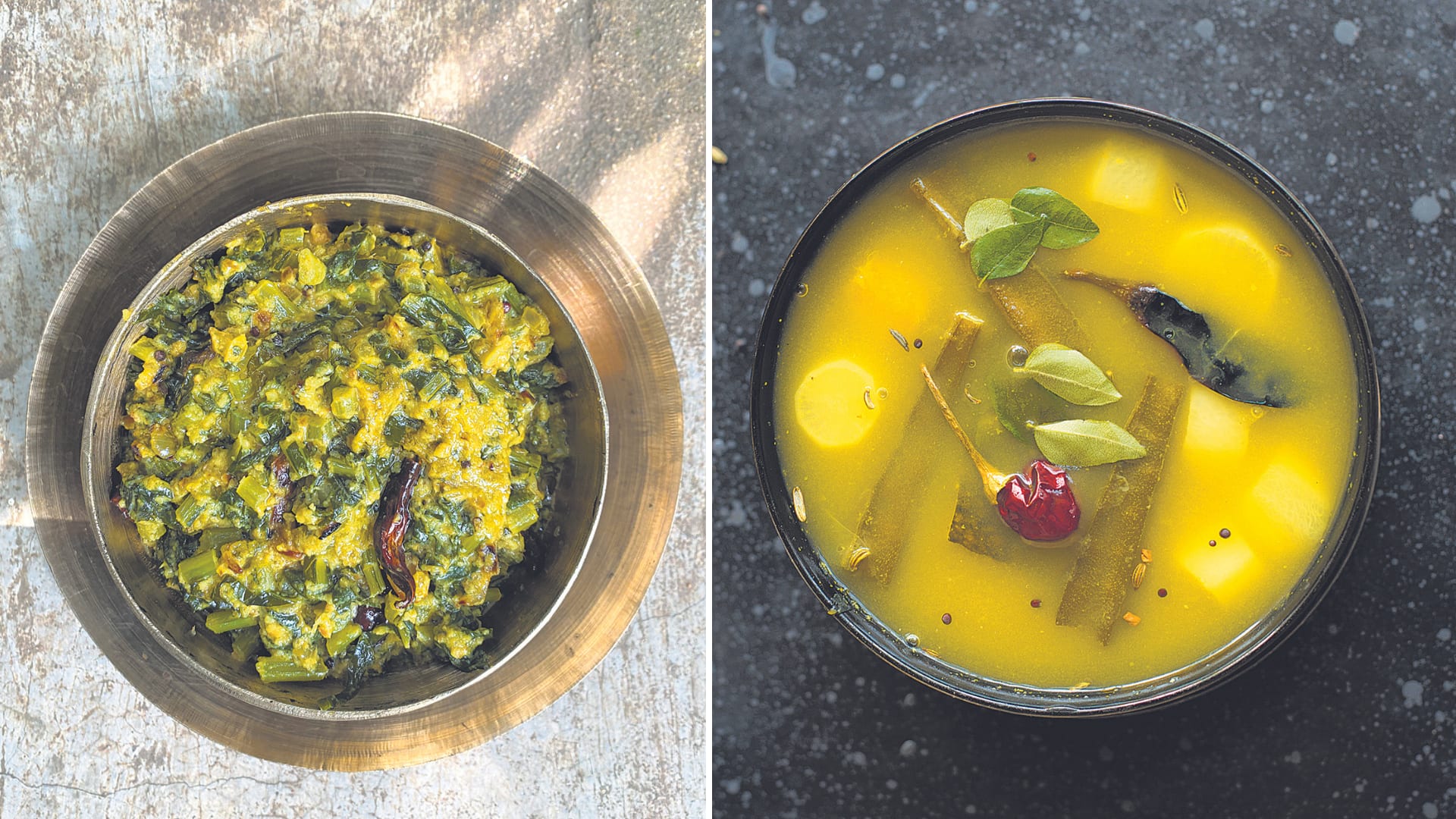 Kanji also is prepared in various forms across the state. In some parts it is made all year round, the only difference is in the seasonal vegetables that are included in it. “In coastal Odisha it is made with torani, or fermented rice water, with added winter products such as radish and pumpkin. Some also add rice powder to make it thick, and it is eaten with hot rice, ”says Jena. “We really celebrate the bounty of nature in every season.”