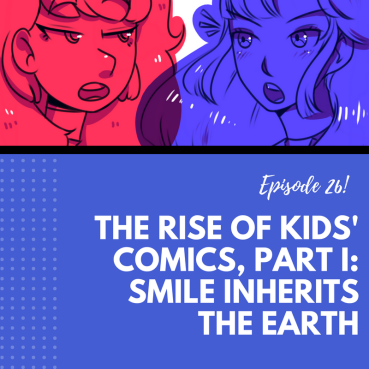 This week Angela and Kelly are taking the first of a two-part look into the meteoric rise of the kids’ comic market, from Bone breaking into libraries to Raina Telgemeier dominating the bestseller lists everywhere. Are Marvel and DC doing enough the capture the next generation of comics readers? Who are the true titans of the new market (and why are many of them women)? Plus, we uncover the fascinating story of DC’s doomed YA imprint that tried to capture the manga demographic in Borders’ sunset days.

Kelly: Kaguya-sama: Love Is War by Aka Akasaka (Viz Media)

Mentioned on the pod (in order of appearance):

Published by One Panel Later

Two Librarians from opposing fandoms try to conquer the world of comics and manga! View all posts by One Panel Later

1 thought on “Episode 26: The Rise of Kids’ Comics, Part I: Smile Inherits the Earth”